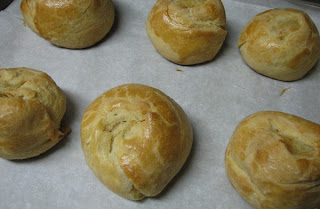 How many potatoes? you ask. We totaled 42 pounds over the last 15 weeks. Clearly we hit some kind of weather jackpot for potatoes. (The other notable delivery: six heads of cabbage and six heads of cauliflower, which doesn't sound like a lot -- until you start thinking about eating a head of cabbage and a head of cauliflower each week for a month or so.)

Back to the potatoes: You'll need only a pound and a half, or about 3 medium potatoes, to make these knishes. Which you should do. Like, now. They are fantastic, and they are much easier to make than you might think.

For the recipe, I must refer you to the Smitten Kitchen website. I used the dough recipe as written and made one small change to the potato and caramelized onion filling, substituting olive oil for the butter to keep the knishes dairy free. The Joe Pastry blog, which provided the recipe that inspired the Smitten Kitchen version, also has fantastic step-by-step photos for rolling out and shaping the knishes.

And with that, the season is over, though the kitchen never really closes. Love and knishes to you all.
Posted by Nita-Nee at 10:17 PM No comments: 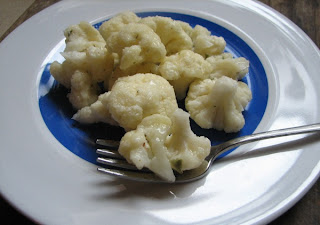 This recipe is quickly becoming one of my favorite ways to prepare cauliflower. And let me emphasize the quick part. All you have to do is pour a simple marinade over bite-size florets. The cauliflower will essentially "cook" itself with several hours of standing time in the refrigerator. Set up the vegetables in the morning and you'll have marinated cauliflower for dinner.

The florets soften a bit in the marinade, but retain much of their texture for a couple of days. Use the marinated florets in a salad, or as part of an antipasto course, or nibble them on their own.

Place the florets in a shallow container. Whisk together the remaining ingredients in a small bowl and pour over the florets. Mix to combine. Cover the container and refrigerate six hours or more, stirring occasionally. 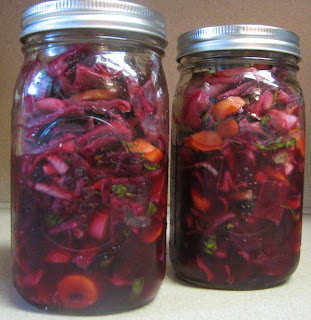 With the farm season winding down, and the vegetables piling up, I've been looking for ways to preserve the produce. Recently, that's meant a series of quick-pickle projects: beets, cauliflower, and cabbage. The tangy goodies will keep in the refrigerator for at least a couple of weeks -- our noshing notwithstanding.

For the cabbage, I tweaked a recipe for a pickled, but not fermented, kimchi. This is a mildly spicy kimchi; it's meant to be pantry clearing, not sinus clearing. The recipe starts off with what seems like an unholy amount of salt, but the final kimchi is not overly salty. That's because the salt is used to wilt the cabbage and to draw out some of its water. The salt is then rinsed off before the cabbage goes into the pickling brine.

I'm storing my kimchi in a couple of quart-size pickling jars, which fit nicely in my fridge, but shallow containers are probably better to keep the vegetables evenly submerged in the picking liquid.

Pickled Red Cabbage, Kimchi Style
(Adapted from Creative Loafing Tampa. Makes 8 cups. Note: the salt amount -- 1/2 cup -- is correct; most of the salt will be rinsed off after wilting the cabbage. Makes 8 cups.)

In a large bowl, whisk together the chili paste, garlic, sugar, lemon juice, vinegar, and soy sauce. Taste and adjust the seasonings as desired.

Add the wilted cabbage, radishes, onion, carrot, scallion, and cilantro to the pickling liquid and mix well. Transfer the mixture to a one-gallon resealable plastic bag and squeeze out the air. Place the bag flat in the refrigerator, so the liquid is distributed evenly among the vegetables, and let the mixture pickle for at least two hours, but preferably a day or two, flipping the bag periodically. Store the kimchi in shallow containers or pickling jars, mixing periodically if some of the vegetables are not submerged in the liquid.
Posted by Nita-Nee at 9:44 PM No comments: 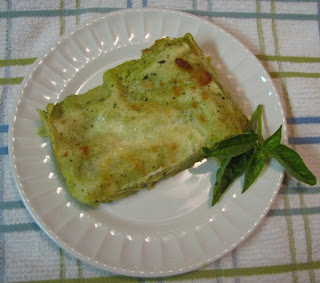 I had no intention of featuring two pasta dishes in a row, let alone two pasta dishes containing winter squash. But with a CSA, you cook what you have; and last week, I had two butternut squash and a sugar pumpkin sitting on the counter. I'm hardly making a dent in my supplies.

If you are not blessed with a squash (or two) of your own, it's worth getting one just for this lasagna. The basil adds a lot of flavor to the sauce, and gives it a pretty green color.

Butternut Squash Lasagna With Basil Bechamel
(Adapted from this Giada de Laurentiis recipe. Serves 8. You can prepare the squash puree ahead of time.)

Prepare squash: Preheat your oven to 400 degrees. Slice the squash in half lengthwise and remove the seeds. Brush the cut surface lightly with olive oil and set the squash cut-side down on a baking sheet (foil-lined, if you like). Roast the squash for about 45 minutes, or until the flesh is soft (but not mush). Let the squash cool a bit, then scoop out the cooked flesh, discarding the peel. Place the cooked squash in a food processor and pulse several times to puree. Season to taste with salt and pepper, and set aside. You should have 3 to 3-1/2 cups of puree.

Prepare bechamel: Melt the butter in a saucepan over medium heat. Whisk in the flour and cook for 1 minute, then whisk in the milk gradually. Bring the liquid to a boil over medium-high heat, then reduce the heat to medium and simmer the sauce, whisking often, until the sauce thickens slightly, about 10 minutes. (This makes a thin white sauce.) Whisk in the nutmeg. Carefully transfer about half of the sauce to a blender and let it cool there for at least 5 minutes. Add the basil leaves on top, then blend until smooth. Return the basil bechamel to the sauce in the pan and stir to combine. Season with salt and pepper to taste.

Assemble and cook the lasagna: Preheat your oven to 375 degrees. Lightly butter a 9-by-13-inch baking dish. Spread 3/4 cup sauce on the bottom of the pan, then make three layers as follows, leaving space between the noodles (they expand considerably when they cook):

Place the final 3 noodles on top and spoon on the remaining bechamel. (You will probably have more sauce than you need.) Cover the dish tightly with foil and bake the lasagna for 40 minutes.

Sprinkle the lasagna with the remaining half-cup of  mozzarella cheese and all of the Parmesan. Bake uncovered for about 15 minutes, or until the sauce bubbles and the top is golden. Let the lasagna rest for 15 minutes before serving.
Posted by Nita-Nee at 12:43 PM No comments: 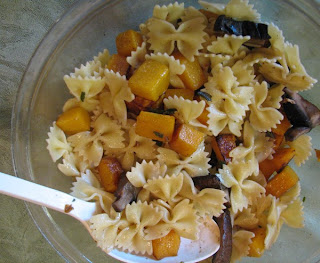 I made butternut squash-filled ravioli once -- only once. The recipe used wonton wrappers for the pasta, and while it was not a total disaster, it was not worth repeating, either. Someday, in a more ambitious moment, I'll go the complete route from scratch. In the meantime, there's today's recipe. It mimics the flavor combination that I was going for, but eliminates much of the work. Definitely one for the "repeat" list.

(And now that I'm contemplating the recipe, I think it would be great to try pairing the roasted vegetables with ricotta-filled ravioli or cheese tortellini, instead of just plain pasta. Lots of delicious possibilities here.)

Pasta With Roasted Squash, Mushrooms, and Sage
(Adapted from Beyond Salmon. Serves 4. If you roast more squash than you want for this dish, you can use some of the roasted cubes in one of these salads.)

Preheat your oven to 425 degrees. Toss squash cubes with a tablespoon (or little more) of olive oil and spread them out in a single layer on one or two baking sheets. Sprinkle with salt and pepper. Place the mushrooms on a baking dish (they can share space with the squash), brush with olive oil, and season with salt and pepper.

Roast the squash and mushrooms for 20 to 30 minutes,  flipping the pieces about halfway through the cooking time, until the squash is soft and just beginning to caramelize. Remove from oven. When the mushrooms are cool enough to handle, slice them 1/4-inch thick.

Meanwhile, bring a large pot of water to a boil, and cook the pasta according to the directions on the box.

Melt the butter in a small skillet over medium heat. Add the sage leaves in one layer. Cook 1 to 2 minutes, until the leaves begin to stiffen and crisp, then add the garlic. Continue to cook until the garlic turns golden, about 1 minute. Remove from the heat.

Drain the pasta well, then mix in the roasted squash, mushrooms, and sage-garlic butter. Sprinkle with cheese, or serve the cheese on the side.
Posted by Nita-Nee at 7:30 AM No comments:

Nita-Nee
I'm a home cook and CSA advocate, and this blog is for anyone who has ever come home from a farm or market with a big pile of produce and wondered: What do I do now?

I share my kitchen space (not always successfully) with The Programmer and our daughters, Kit and Caboodle.